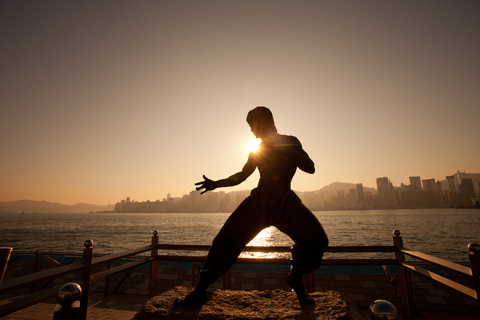 JKD has adopted the deficiencies of traditional martial arts (TMA): faith based martial arts training, as I call it. Without questioning all facets of martial arts through the process of simulation training and mere skepticism, all TMA falls short of reality. And JKD is a peripheral victim. The fact is that martial arts training involves pain and frustration and randomness, and it’s not for everyone. It is not glorious at all in all the suffering that goes with it, yet it is a passion like anything else. Even disciplines that are proven through sports must be proven to each successive practitioner. For example, no matter how convinced we are that an arm-bar works, we cannot even trust a Royce Gracie without trying it for ourselves. We cannot know viscerally—not just theoretically—how to do it to an opponent until we actually do it.

Faith based training is what has become of martial arts. Coaches don’t tell why and students don’t ask why. Their training itself doesn’t answer why. Even mma gyms seem to have allowance for quasi-practitioners who just go to classes, do partial-contact drills, but don’t do the free sparring with minimal protection. Minimal protection is important, because you must be free to release genuine force and also process the pain. JKD men often put full gear on (shin protectors, head-gear with mask, and even stomach protectors); this allows fighters to release force upon one another, but it does not allow fighters to process the pain and react to it. Conversely, “gear-less sparring” generally does not allow fighters to release real force on one another, and then there’s nothing to process. No pain, it’s like play-fighting.

The adoption of instructor titles and monikers is another indirect perpetuation of faith based training. It causes students to become followers who don’t question. It’s like religion of martial arts. A coach’s ability to communicate a way of thinking about fighting is better than any coach brainwashing. Anything that lends to brainwashing—as in “believe this because I’m saying so, trust me”—should be extinguished from martial arts. Such things like Sifus and masters and Professors have zero effect on improving martial arts. In the army they break you down to nothing, and on so many levels they brainwash you. Martial arts is not like the military in which you are taught to sacrifice yourself completely to your military’s cause. In martial arts, you sacrifice completely to and for yourself. A hierarchy on almost every level of martial arts stunts the only thing that matters: fighting ability. And respect, in combat arts, is inherent, if not earned on an individual basis. The point is that everyone is equal in martial arts and should question every skill, as fighting is a never ending evolutionary process among the vast array of disciplines.

In JKD, their three main aspects—efficiency, directness, and simplicity—is misleading. It seems inherently correct, but once you put it as a numbered aspect of a way (be it ‘of no way’ or whatever), you make it a “rule.” I would rather sacrifice efficiency, directness, and simplicity for something that simply works for me. Plus the 3 aspects are subjective. It can be argued that boxing is the least simple of martial arts, as it may be the most rigorously strategic. I question, for example, the effectiveness of trapping ala Wing Chun. JKD men all over the world are convinced that this stuff works. It seems efficient, direct, and simple enough, but how do we know? No one has ever used it in full contact combat with any bit of exclusivity. There is no known use of it in combat, period. Paul Vunak, a JKD man who was known for his excellent trapping skills, had plenty of instructional videos exhibiting the trapping range in what I call “contractual sparring.” By that, I speak of sparring in which one guy is limited from using at least one technique that his opponent is not limited from using, or one man’s goal is different from the other man’s goal. Something like this is really just a drill. The truth is that a fighter cannot trust any technique for himself because somebody says it works. A fighter cannot even trust a technique for himself even if he has seen it in action; he must practice it himself and ask the questions in every way he can. Mainly, “how and why would this work for me?” So how can the masses trust a technique they have never seen in use and have never tried themselves? And I don’t know about some of those Brazilian Jujitsu moves either; they don’t seem too simple, direct, or even efficient, but they sure as hell worked for other people. They just don’t seem as cockamamie as, let’s say, Ninjutsu. But hey, maybe that deserves some inquiries of its own.

Only an individual can answer what is best for him in combat, but he should be honest and realistic. If a technique works, is it the best move for a fight? Is there a set-up, follow-up, and counter? Is it a one time move like a Superman punch (meaning you can’t do it over and over because you give the move away)? What does it “working” mean? What if it worked 75% of the time before, but it’s completely failing this time? Do you have the proper tools to solve the problem? What if your technique doesn’t offset another fighter even one-bit? What if the move does the intended physical damage, but the guy keeps coming? Then what?

Question everything…Even what you are reading right now…1…2……3. You are cured.

I thought religion was “the opiate of the masses.”

0 Replies to “The Problem With Bruce Lee’s JKD – Afterword”

0 Replies to “The Problem With Bruce Lee’s JKD – Afterword”