Home » Size, Clinching, and the Klitschkos

Size, Clinching, and the Klitschkos 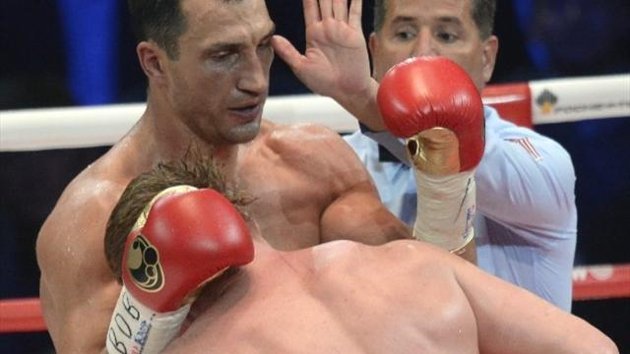 There is a lot to be said about winning fighters:  they can be applauded for their hard work, for their dedication, and for the fact that they must be more skilled than everyone else.  But it doesn’t necessarily hold weight when considering how imbalanced the playing field may be.  Although I don’t fault Randy Johnson for throwing 100 mph fast balls due to his size, I do believe that if everyone else with his similar size threw just as hard, his greatness would be diminished, at least when considering accomplishment and talent.  For Johnson, that is not the case.  He’d probably be great if he were 5’9”.  If Shaquille O’Neal only excelled against guys who were less than 7’ tall, I would question his abilities.  But if he was the only 7’+ player who could be effective against sub-7’ players, his greatness would be validated.  And because there were, in reality, many players of comparable size to O’Neal, his place among the top players will remain. This goes for any attribute; if a guy is fast, he will only prove himself against the fastest, if he is strong, he will only prove himself against the strongest, and if he is the fastest and the strongest, he will need to be tested even further.  This is the whole idea behind fighting, and sport in general.  The idea of competition is epitomized when the challenge is just right.  This is “shooting a fair one,” if you will.  Some of the great old-timers would go boozing the night before a fight just to test themselves.  Those are sportsmen if I’ve ever heard of one.

In sizing-up Vitali Klitschko, who is due respect in his own right, his skill-set must be considered that of the mediocre sort.  If you have any attribute like size, and are winning solely because of it and you are not, for whatever reason, competing against anyone who shares the attribute with you, you may be a lot worse than your popularity asserts.  I agree with the boxing adage, “A good big guy almost always beats a good little guy,” but over the last 10 years or so, the heavyweight division has been “run-of-the-mill big guys skimming by undersized good guys by not out-boxing them, but by out-defending them.”  It was either them running away or jumping on the little guy’s back when punches were being thrown – both tactics with little technique.  The moves have often been boring, boorish non-fighting.  I’m not saying that Vitali is that bad – I mean he did practically beat Lennox Lewis, the other big guy who was a little more “big” than good.  It is just that he is the quintessential boxing dilettante who seems to excel primarily due to his size.  The deftness and expertise of Lewis and Klitschko was, by mere exhibition, status quo.  I know “lack of luster” has always been the problem with the heavyweights, but now, more than ever before, size is the only thing dominating the division.  It is arguable that you can get ten NBA forwards and put them in the same training that Lewis or the V. Klitschko had, and they would be just as good, or even better.  This is something any informed aficionado can never say about top fighters in other divisions.

I strongly oppose the increase of the minimum weight for the heavyweight division, but I think illegal clinching (also refer to my article, “Counter Clinching”) needs to be enforced more in this division.  This way, boxing avoids making more of a joke out of the heavyweights simply by keeping its largest and more talented consensus, the lower 200-pounders.  And with reducing clinching, it allows everyone a fair fight.  But the slippery-slope does not apply so harshly to other attributes other than size because size is not changeable, it is what it is.  Also, there are few guys who are of a Vitali Klitschko’s size; if there were more, I would have no argument.  (So don’t try to say that something needs to be done to balance out a fast fighter’s speed by putting weights on his elbows).  Also, size discrepancy is the biggest culprit of the advantageous hoaxes that plague good competition.  It is similar to my dissatisfaction with mma; mma is a competition wringing-wet with different high jinks, and it becomes a competition in which participants try to make it the least fair at every given moment.  The big, lumbering heavyweights in boxing, like the Klitschko brothers, are essentially doing the same; they are supposed to be in fair boxing fights, but they turn it into the game of cheating.  It may sound bitter that I am indicting these fighters for trying to “not fight the good fight,” but clinching to avoid boxing, like wrestling to avoid equal ground, is akin to cheating, however you want to preface it.  Boxing, on the other hand, is like Chess, the game of kings, in which it is all about the nuance of outsmarting one’s opponent, not avoiding him.

Maybe a bigger guy will come along, someone the size of Nikolai Valuev, who will finally excite us about the heavyweights.  Maybe he will menace the division as a gifted boxer, not a savvy escape artist.  But if he’s a giant built with any talent and the fighting spirit that can make us imagine greatness, we’ll all believe that he could do it “even if he were a welterweight” because his skills will outweigh his build and his heart will overshadow his wingspan.  He will take hold of our imagination, in the ring never holding.

0 Replies to “Size, Clinching, and the Klitschkos”

0 Replies to “Size, Clinching, and the Klitschkos”