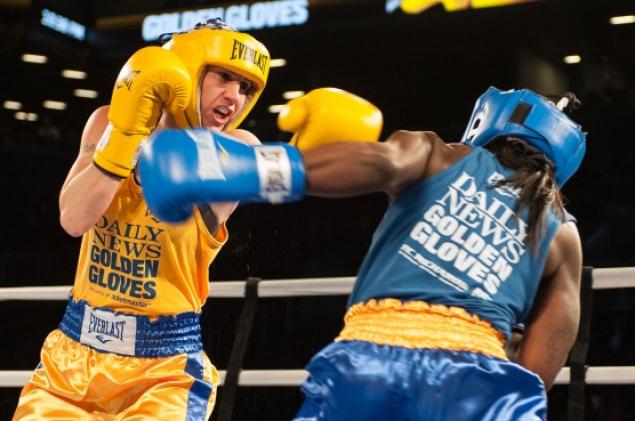 ShootaFairOne.com and Apolis Training Systems (Apolis BC) is always trying to find a good fight and look for prospects.  The last few years of New York amateur boxing have spawned some top fighters, continuing the rich, storied boxing tradition of New York City.

Who’s the next great to come out of the New York Daily News Golden Gloves, the oldest amateur boxing tournament in the country?

*Coverage by Al Alvir, Garrett Morris, and Joseph Basile with special thanks to Dom Pisanelli of DKC and the New York Daily News PR.

March 26, 2010 Finals  – The second night of the New York Daily News Golden Gloves at the theatre at Madison Square Garden had an even better turn out than the first night.  I’m glad to see boxing is still strong, as many fathers took their sons to this noble sporting event supporting local fighters.

The best fighter of the night was Eddie Gomez, Jr.  He threw sneaky 2’s (crosses/straights), then later threw big left hooks, classic 1-2s, and 3-2 combinations that staggered Cletus Seldin while Gomez smiled at the blood.  Gomez was the second or third best fighter in the tournament, arguably. At 17, he is one to keep an eye on — as long as he doesn’t get ahead of himself.

The 165-pound Novice Championship was filled with action, but Allen Brunner was extremely sloppy, dropping his right when he threw his left jab. Frank Galarza won via decision.

Other highlights of the night were Hamzah Al Nuzaili and Idrissa Kamara who were both big fan favorites.

March 25, 2010 Finals – The first 15 championships of the 83rd annual daily news golden gloves were quality fights. Highlights of the night started off with a skillful 165-pound Open with Travis Peterkin beating Vincenzo D’Angelo by decision. D’Angelo, of Competitive Edge in Long Island, won last year but was edged this year by a more active, more combination-throwing Peterkin of Kingsway BC. At times it seemed like Peterkin would throw his jab to the side and shoot his left straight over it making it’s mark.

A stout Gary Beriguette was fun to watch as he bum rushed against a more accurate Peter Dobson in the 152-pound novice championship. Beriguette seemed tired by the third round and lost a decision.

In an interesting 119-pound women bout, Christina Cruz, ranked No. 1, was going for her fourth title against her to-be trainer for the 2012 Olympics, Alexis Asher. More closely matched than one may assume of a No. 1 ranked fighter and her trainer, Asher chased, often finding her mark while Cruz floated to her share of punches landed, as well. Still, Cruz cruised to decision. One spectator criticized, “they just punch so light.”

Particularly different was Aleksey Kuper who was knocked out by Michael Spiegel. Kuper was composed, but Spiegel pressed like a throwback. Kuper seemed to have a decent skill-set, like a tall European, with an upright style and sneaky hooks off of very measuring jabs.

In the most anticipated bout of the night, Shemuel Pagan won a decision over Carlos Teron. Pagan fought unusually aggressively, abandoning his slick style exhibited in his other bouts. Some of the crowd felt it was a robbery, but it was clear to most ringside observers that Pagan won by a large margin. Teron seemed to complain as well, and Pagan’s fans were telling him not to shake hands after the decision.  So what appeared to be bad blood among the two combatants  was ultimately a record-tying 5th New York Daily News Golden Gloves title for Shemuel Pagan although he seemed sloppy and was caught with some shots that he’s too good to be getting caught with.

Marcus Browne was the most impressive of the night as he defeated David Thompson in a lefty contest. Browne was smooth with a crisp right hook that he kept loading-up on, but he won a decision in this 178-pound open.

In the 114-pound Open, Anthony Caramanno boxed beautifully against a strong Jordan Rodriguez. Caramanno crouched and exploded at times while Rodriguez gave chase cutting off the ring. This bout was a classic boxer vs. puncher match-up. Both fighters had their points in the fight when they won exchanges, but Caramanno took the golden gloves.

In a Heavyweight Women bout, Shanell Mathes looked to be the most skilled heavyweight woman in the tournament.  She had a smooth jab and opened-up with hard combinations several times. Mathes defeated a resolute Narelie Pacheco by decision.

In the Super Heavyweight Open, Roberto Morban and Davone Jones squared off. Morban was the bigger man with a fast right hand. A lot of the action was toe-to-toe, but with little strategy. Morban had moments when he dug to the body while Jones strutted and threw looping, slapping shots. Morban was the better guy and won by decision.

The final bout of the evening pitted Earl Newman against Thomas Hardwick for the Heavyweight Novice title. Newman was the more composed fighter, even at 18 years of age, slipping a lot of Hardwick’s amateur looking punches. It was a close fight, but Hardwick got the decision – perhaps because there are never draws in the Gloves.

February 19, 2010 – Holy Cross High School, Queens – This was a standard night in the Daily News Golden Gloves preliminary rounds with some par performances and fights that showed heart with green skills.  The heavier guys looked like the standard tough-man flailers.  The light guys had the skills, but the crowd wanted the blubber and blood of the big men.  Please excuse any misspelled names due to not having a competitor’s list on-hand—corrections will be made.

Alejandro Valenti threw a lot of straight lefts from his southpaw stance and was robbed, according to most ringside viewers and unofficial scoring, against Williams.

Alberto Arce defeated a tough opponent who lacked the desire that his fan section wanted.  Chad [last name] had the skills, but Arce showed the judges that he wanted it more.

In what many people thought was the best fight of the night, Ariel Sanchez and Luis Castillo brawled, all skills thrown out the window.  Castillo squeaked out a decision.

In a superheavyweight bout, Cory Skinner and Marco Aprilla fought their hearts out.  Onlookers were saying that it was “embarrassing” and “like watching two girls fight, only sumos.”  Marco Aprilla, at least, pulled off that tko in a fun fight to watch.

Emilio Ramirez bloodied up Andre Salino who seemed to be pulling back from too many punches and got caught too much.

Gregory Masyellow pulled off a win in the nights most skillful brawl against Rasheed Wright.

In the KO of the night, a brash Luis Cruz knocked-out Gerard Lombardo with a beautiful left hook early in the first.

Another robbery according to the jeers, Mario Contreras was given an “L” against Javier Baez.  Contreras got inside and seemed to throw the telling punches, but Baez scored better.

February 3, 2010 – Club Amazura, Queens – There were some decent fights this night, but most obviously novice.  Umedzhon Soatov of IMB and Matthew Armstrong both won.  Gary Beriguette of Universal BC was entertaining but way too hyper against Christian Rosado of Kid Kelly BC.  If he settles, he can use his talent better, but I see him walking into something before the finals.  Rosado was winging big body shots from outside, and that’s a big amateur mistake.  Jose Collazo looked decent in his victory, too.

But the highlight of thenight was Samuel Zulueta of Havoc/Coney Island BC.  He looked sharp and powerful against Christopher Oreckinto.  If Zulueta’s chin is as good as his onslaught, we might see him in the finals.  I only watched about 20 seconds of fight in this bout, but I’d try my money on him next time.  Oreckinto, Unattached, will hopefully fight another day.