Home » Need Mittwork? The Most Overused Farce In All of Boxing

Need Mittwork? The Most Overused Farce In All of Boxing 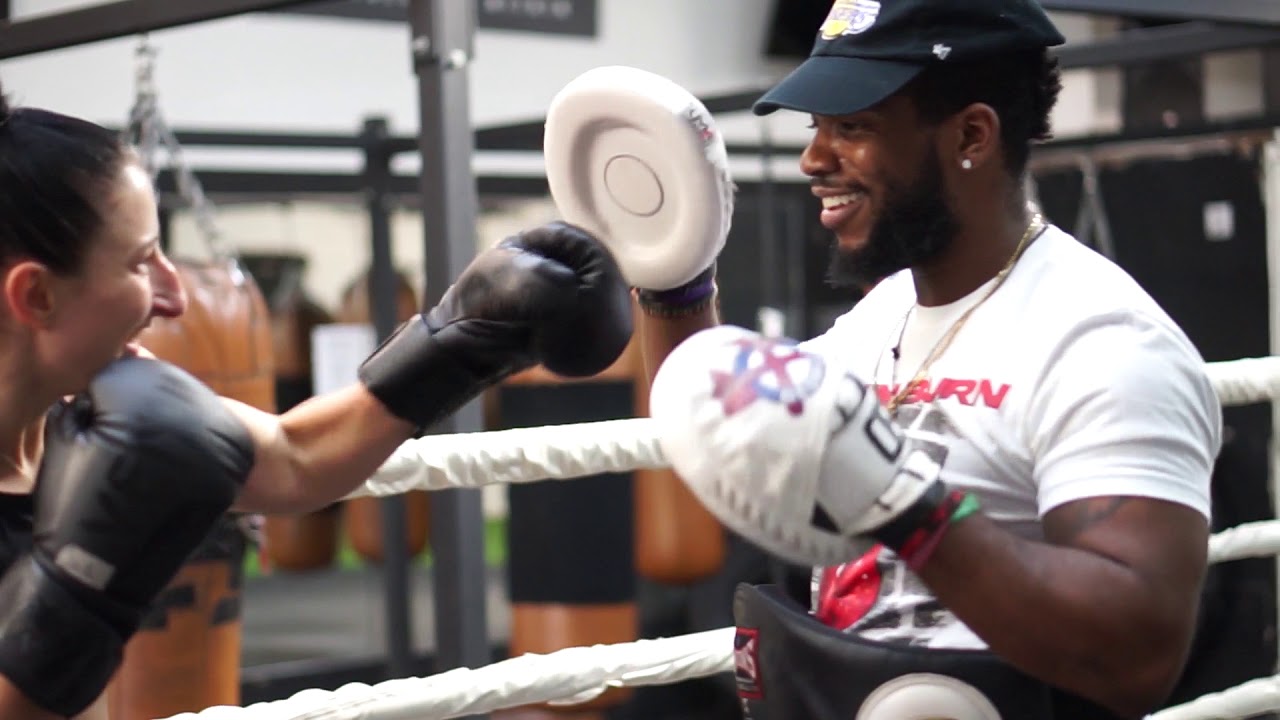 This is a bit of a long-winded explanation on why I’ve always been against private training in sports.  But stay with me.  Private training (which usually ends up to be a paid extended session of what most boxers love to do: mitt-work) is an expense at slim returns. As a coach, I have always been adamant that I’m not a personal trainer, I’m not a bellhop or personal assistant. I’m not here to make practice easier to put-up with.  There’s a disconnect with many potential boxers as to what they’re aiming to accomplish when they work one to one (1:1) with any trainer.

What am I private training you for? Do you want my expertise to oversee you practice? Do you want to just have a fun extended session? What do you think will be accomplished in a private session with an experienced coach that can’t happen in an open coaching setting, a regular training day?  Seriously, do you have a learning disability?  Do you want mitts while your mechanics are not up to par? Do you want a practice partner?  What if the coach has you practice the basic “step and slide” for a whole hour while he watched you try not to do it wrong and interjected every few minutes the same exact directions he initially gave you which you aren’t following?

The only way private 1:1 coaching for any extended period of time (anything over 20 minutes) is beneficial is if, and only if, the most useful way for the boxer to spend that time AND the most useful way for a trainer’s knowledge to be used along that time span are not mutually exclusive. Otherwise, somebody is wasting her/his time.  Now, as a responsible coach, I feel I need to put aside what is important to my time and ONLY focus on how to make the boxer spend the session in the most useful way possible.  A trainer isn’t there to fill-in time; rather, his obligation is to make a boxer better while coaching the boxer within the time the boxer puts in the gym as a whole. The ultimate question is: Are you, the boxer, ready to spend money as insurance that you are getting proper guidance even if the coach tells you to do the same repetitive drill for an hour straight as opposed to getting an amalgam of upbeat exercises and compounding moves over a one to one session?  Additionally, is mittwork going to fix your mental weakness in the ring?  Will spoiling you make you overcome?  Will mitt-work make you feel indebted to me?

Boxing is no different than any other sport when it comes to the type of work one has to put in. But there’s a myth in boxing that group training, classes, or one to one time is what makes people excel. All martial arts struggle with this. For anyone new to boxing to those who are inculcated into boxing, random reservations of extended time sessions is just pandering to the neediness of people. If a new person who has only been in the gym for a few weeks wants to schedule a 30 minute session, if he is worth his blood in boxing, he is wasting his time in a session because he can accomplish more without it. The goal should be to use that time in the gym as productively as possible.  That is almost always to practice what the coach has already taught (here’s a secret: watching a fighter practice something that a coach asked is one of the most satisfying part of a coach’s regular work day). In personal/private training, there is an unwritten obligation to force feed boxers.  Or a coach could have an easy time just repeating something that can just as easily be done on a bag.  Besides it making for spoiled, shitty boxers, this kind of coaching undermines the essence of all sports training: individual practice.

Imagine having practice 2 or 3 times a week in any sport and not practicing any other time. Imagine learning calculus by only being individually tutored without practicing. It’s unheard of.

So who really needs mitt-work?

In short, no one.

Some of the greatest fighters in history never did mitt-work. Before the mid-20th century, mitt-work didn’t even exist. When the great trainer, Charley Goldman, first reversed boxing gloves to have his boxer warm up punching his padded palms, it was hardly a wildfire. It took years for trainers to catch on to the ingeniousness.  When it first became popular as a training tool, many trainers thought it was dumb. Why would anyone actually practice punching someone’s palms?

And I’ll let you in on another secret: the worst, non-excelling guys in your gym are probably the ones who get the most mitt-work.

Mitt-work has great value besides brainwashing white-collar boxing clients, giving them fun feedback to their punching. At its best, it is not for fitness or even for drilling in absence of a sparring partner.  I see little practical use in a punch-pad either, besides working some specific footwork and positioning.  Why should I hold a pad in one place, when you can do the same exact thing on a bag?  At mitt-work’s best, it is for the fine eye of a trainer to fine-tune particular skills (feints, set-ups, technique) and moves from an educated perspective.  And I personally only do it for real boxers, fighters who earn it (and it’s the only time I truly enjoy it, personally.) On a lesser note, it has some/minimal value for early boxers for assessment and pointing out fundamentals and reviewing defensive techniques. Where words and demonstration may fail, some boxers can use a coach to review on the pads, but for beginners, it’s not much more.

Open coaching settings are how most sports athletes learn and improve. Open coaching is what I call it as boxers follow a program/schedule of practice while they are “coached” or observed – and there are also often times when the coach knows that he doesn’t have to observe; a boxer just needs to practice over and over what he has been taught over and over. It isn’t always fun or fulfilling to the senses, but it is exactly how learning and improvement is achieved at the maximum rate. When real fighters come in, they often have to put in hours upon hours of the same thing to remotely be able to fathom another move. At most boxing gyms, hourly coaching is offered, but the vast majority of gyms do it in open coaching settings – not an allotted hour just for 1 person. There are some variances from club to club, but coaches seldom work as personal trainers assisting in boxers’ workouts. Stop-watch coaching, or holding hands, is what we sometimes refer to it as, and it’s insufferable. If a real boxing practitioner needs more time, he’ll get more time, organically. When he pays for it, it’s ruined.

I am bothered by the possibility that the overwhelming majority of fighters who want personal coaching just want the guidance at the cost of top-grade training time.  Personal training hours are subconsciously considered by many boxers to be shortcuts. It seems like they think they could get 3 or 4 hours a week with a coach and it will make up for the fragile 7-8 hours that is considered a minimum for serious boxers.  The time in a private session becomes a fallacy, as there is no reroute to the top; top grade training time is always going to be hard, consistent practice. The coach maps it out and makes sure that boxers are doing things correctly.

I am afraid that hourly personal training time – whether anyone likes it or not – is a swindle. The only type of person who benefits from personal training over program/schedule training is a bored person who actually needs the push.  Maybe he is in the gym for the camaraderie.  One to one time is also a relationship builder, and coaches often can do this to build rapport or to take people’s money.  But don’t fail to understand that fighters and coaches will become an unbreakable team with an undeniable bond without the private time. It’s what happens in boxing almost exclusively.  People who truly have a need for personal training are too often people with poor work ethics and people who are a little lost.  Or maybe they just don’t know how learning is achieved.  I’ve heard from several sources that “they need to get a good sweat, so they think you’re helping them.” I understand, but I vehemently disagree.   The idea of selling to the senses as opposed to a pure product is a “sellout” move.  I want to perform a job, and that’s to help people become better at boxing – even if that means discussing a few steps over a coffee in the office as opposed to burning-out their muscles telling them to do some calisthenics or force feeding them new insights on the mitts that they have no right to.  A coach is not a big brother whose job it is to hold anyone’s hand through training time.  Some privates (private trainees) just train their 3-hour sessions a week with a coach without the additional practice and exhausting repetition.  At best, that may be the only reason why privately trained boxers tend to never meet their potential (that they’re only training a few hours a week), but I think it’s a deeper personal problem in most cases. And even if I know that you should only be doing a single drill for two weeks, when I’m doing a private session even I feel obligated to move to something different and keep it somewhat constantly changing or engaging.  And I know I can blow the mind of most boxers, giving them new anecdotes and cool moves that they won’t even be able to keep up – that’s part of the con, but I never wanted a part of it.  Don’t at all get me wrong, because for those few boxers whose mechanics are a standard above par (oxymoron), an hour of a coach observing and handling pointers the boxer’s way may well be worth the money once in a while. That “while” meaning a blue moon.

The swindle is that sweat seems like money-well-spent, but a world-class session to the average boxer may not really seem to make sense.

Otherwise, it’s a waste of my time. Forget the coach though. It’s an utter waste of your time.

*This goes for you too, Greg C. Thanks for the feedback.