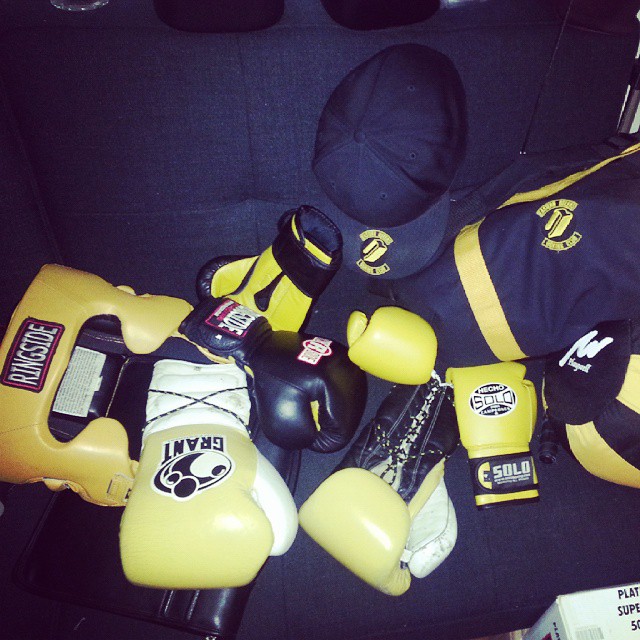 I’ve borrowed some of Roger Mayweather’s mittwork for the live, conventional mittwork that I do. But by no means can I ever condone it solely to be proper mittwork. A New Jersey based trainer, Coach Rick, or his corny pseudonym, “The Mittologist,” sells this stuff on youtube and even has some $199 con for becoming certified in Mittology. Floyd Mayweather wannabes across the globe are following suit.

Say goodbye to the old-time art of live mittwork.

Mittwork nowadays across the US consists of guys throwing fast combinations of quarter punches with their hands held really low and little hip being used. The Mittologist is not the only one selling this. Coaches get into the set patterns and find that it’s the easiest way to take people’s money (I’ve heard that from a few coaches themselves). Because this Mittology, above all benefits (if any), is fun for most people – especially beginners. Perhaps it wasn’t meant to be just a money maker and flashy, but after the set patterns are learned, this stuff is disgustingly easy – especially for the coaches.

First of all, the coaches don’t have to go through the grueling hard work of coaching distance, angles, and strategy when doing this Mittology stuff. There is no randomness, bumps, clinches, spins, getting hit, punching at the same time as blocking, and there are no options (you must move in the set patterns). Second, it is still exciting and fun, yet it has the incomparable variable of being safe. It’s like the TaeBo of mittwork – the people, even actual boxers, think they’re really getting authentic boxing mittwork, but they’re getting more of a workout as opposed to real moves and real education.

After having one vapid boxer of mine – one who came to me already brainwashed by Floyd Mayweather Jr. – actually purchase the Mittologist’s videos, I watched a few of them with an open mind (just on November 19, 2012). No doubt, I think the Mittologist guy probably knows better and is just making a business move on the sport, making videos that are virtual knockoffs of Roger Mayweather’s set patterns. This whoring is what I have a problem with. I can’t say that technical and detailed work isn’t done with fighters away from his mitts, but I am saying that this mittwork is brainwashing viewers into thinking that it’s “the secret to better boxing and coaching.” I’ve heard no mention that sparring and alternative work is essential. Not once did I hear mention that conventional mittwork is good to work into his routines. And it really gets on my nerves that there is a stupid certification that seems like anyone can buy. What governing body gave him the right to certify anyone? Can any coach make up some stupid gimmick and certify it? I have a number system that I created for communicating angles and head locations and punches; should I certify people who pay me? Where is the profession and years of understanding boxing inside and out that goes into the coaching? He calls it technical mittwork, but it is almost absolute in being the opposite of that. This is my issue with many youtube coaches. There are probably only 3 known ones that I can cosign. There are innumerable hacks on youtube, but at least some, even the non-boxers, don’t make up catchy names and rename boxing moves like this guy.  My point is that much of the sale of these videos gambles on people’s perceptions and their false correlations: they think Floyd Mayweather Jr. was successful doing this stuff, so they think this stuff must work the best. It is the classic idiot’s trap. It’s akin to an ad hominem argument – an argument made against an opponent, as opposed to an argument against the opponent’s argument. If I said Roger Mayweather sucks on the mitts, someone might retort that I don’t have the best fighter in the world, so I must be wrong. Such illogic are important factors to understand when deciding for or against this type of stuff. Many coaches I speak to agree with me, yet some of them are doing this mittwork because white-collar recreational boxers buy into this stuff.

The Mittologist claims that this mittwork instills fluidity and reaction. I contend that live mittwork does that and more. Live mittwork, on the other hand, doesn’t have the shortcomings of fake blocks and shoulder touches and quarter punches. When I do mittwork, I really punch at the fighters, and I really review the techniques and strategies. I have mittwork for opposite stances and for same stances. I mimic different fighting styles and throw punches in different ways. I often wear a body-shield so fighters can go to my body at will. I catch punches with the mitts on my head, too. My mittwork is comprehensive, not just aerobic. Fighters get to feel almost like they’re in a fight. I treat every boxer differently, and I feed the mitts differently to each of them. They, in turn, learn fluidity and reaction without the hoax. How is Mittology any better than this convention? How is Mittology any good, period? Is it like Karate’s Katas versus sparring. Do boxers even shadowbox the way they do this mittwork? Do they fight that way, too? The answer is an expletive and “no.”

I am knocking this stuff because I think its widespread appeal is based on gimmick and exploiting the ignorance of people who don’t know boxing. Perhaps the guys who do this know more than what the rote mittwork exhibits, but I am only going off on the mittwork itself. Check out the mittwork on the internet. The boxers often don’t protect their heads, they don’t turn their hips, and they don’t turn over their punches. They don’t even really roll or block punches. They aren’t even actually punching too much of the time. This doesn’t make all these mittwork routines necessarily wrong, but the fake stuff is a major part of the selling of this crap. The appeal is that it’s fast and non-stop; it looks cool to people who don’t know how easy it is. Manny Masson does a similar routine with Yuriorkis Gamboa, but the techniques are almost fully completed, thus the punches and movements are more realistic; this is much more difficult, although Masson also just touches Gamboa’s shoulders. And I question how random any of their stuff is, as well. When you watch live mittwork, you will see mistakes every round (e.g. missed counters, late moves, hesitations, and people getting touched with punches). Live mittwork is not based on set patterns and solely verbal queues. It’s live, physical, and cerebral, and you benefit from getting as close to sparring as you can while practicing detailed strategy and technique. Even the set patterns have their randomness as it’s mixed in with all the other work. Mittology seems to be just another workout drill, like bad double-end work in which guys don’t really throw complete punches and don’t move realistically.

When I argued with my ignorant boxer on how stupid I thought the patty-cake Mittology mittwork is, the young boxer even said to me, “If this mittwork is so bad, why is the Mittologist’s wife a golden gloves champ?” I told him to look up Logical Fallacies and then, only then, work on an informed opinion.

No matter what, I will never give him a behind the back mitt feed. I’d rather lose him to the grift.