Home » Is Mayweather Mittwork All Show?

Is Mayweather Mittwork All Show? 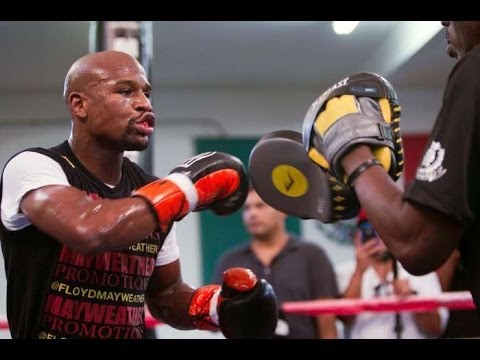 There is a new phenomenon in the boxing world.  Like Muhammad Ali followers who fluttered like butterflies and Mike Tyson wanna-be’s who imitated his substance like aluminum for iron, it seems that everywhere there’s a new garage opening for a gym, one of its trainers believes he could duplicate the success of Roger Mayweather with some flashy  mittwork.  Some believe so without a semblance of understanding of his fighter or for mittwork in itself.

Focus mitts were incorporated into boxing many decades ago and more – so there are different theories on its origination.  Boxing trainers use focus mitt work (aka padwork or mittwork), to give dynamic practice for fighters to work on the things that happen while fighting.  It gives a live body to train in front of.  It continues to be used today for warming-up a fighter, working on movement, and fine-tuning skills.  The problem is the focus of the mittwork; what is a trainer trying to achieve? Boxing trainers are increasingly adopting a cookie-cutter approach to teaching skills.  Today, padwork is more for warming up guys or showing-off than for fine-tuning skill-sets.  People love the way the Mayweathers do padwork perhaps because it looks so intricate.  Other trainers stick to fads like towel slipping and tube punching – useful in some ways and some much less than others – but should not replace good ol’fashioned mittwork – the kind that is almost like sparring.  And we don’t replace sparring, right?

The repetitive and fast action of the Mayweather style of mittwork indeed helps reflexes, short punches, and making things second nature, but bad habits may develop from it, too.  There are plenty of young non-Mayweathers who don’t have the pedigree or time to become good in spite of paddy-cake padwork.  They aren’t sitting on punches, turning their hips, or learning how to improvise within the fundamentals.  There is no doubt that Roger, Jeff, Floyd Sr., and Floyd Jr. were each tremendous talents who exhibited those skills, but I think the chipmunk quick mittwork we see for two seconds clips on tv had less to do with it than the amalgam of everything else.  Evidence suggests that they spent years touching up on the how’s and why’s before they became known for what many experienced eyes would, and do, call nonsense.  But far too many boxing trainers are selling it to kids without the substance.

The biggest benefit of Mayweather mittwork is that it teaches fighters the way to react in a fight and that “touching” (not trying to throw punches too hard) is essential to good boxing.  It’s arguable that the rhythm of punching is more important than sitting on punches because “touching” happens the majority of the time.  But if trainers can agree that a fighter must learn the fundamentals first – where to stand, angles, all the defenses, how to adjust – they could agree that many fighters are wasting time reacting and being fast over learning the essentials.  Also, trainers may agree that they need to learn their fighters and the fighters need to learn themselves.  Form and technique are paramount.  Trainers know this intuitively, but many of them allow their fighters to tap the mitts dropping their hands, not turning over punches, not extending their jabs, and fouling up distance and being naively vulnerable.

Mayweather mittwork, as some people would call “paddy-cake-paddy-work,” is almost completely choreographed.  And good feeds (the holding of the pads) should mimic the head, body, and real shots coming back.  The feeder should clearly differentiate what is the target and what is a punch, because in a fight the head doesn’t regularly come to your fists.  With Mayweather mittwork, the trainer does almost as much work as the puncher does.  Of course, trainers are supposed to meet the punch with the mitts to provide feel, distance, and resistance to the puncher, but the Mayweathers and their copycats do it too much.  Also, like the speedbag, mittwork can be too routine, the combinations and the feed has to be random that fighters have to go “freestyle”.  It should always be challenging.  So the fighter shouldn’t always know what to expect and shouldn’t always do the same things off of his defense.  And for many fighters, especially beginners, speed becomes rushing, and that kind of speed sacrifices form just as much as punching too hard.
Evidence suggests that the sales-pitch of mittwork has been lucrative, but can cost in the skills department.   One white-collar boxer showed me a tape in which he was hitting the pads, and he did it like a prodigy.  He said he tried boxing ONLY because his coach (who remained anonymous) held pads like Mayweather and he was sold.  He told me, however, that he couldn’t transfer any of that choreography into the ring because he never learned real defense, “how it feels to take a knockout heavy punch on the gloves.”

I don’t condemn this philosophy completely, as I do believe that the Mayweather “speed-pads,” as some people call it, is the best cookie cutter mold for approaching offense and defense.  The basics of Mayweather mittwork come down to a few basics (for those of you who have no clue to the mystical sleight of hand they see before them):

There are variations on these basics (e.g. you can weave a left hook, too) and various combinations that come off of it, but the trainer calls out the defense and lets you know what’s coming after the combinations are each rehearsed.  All trainers do this to some extent, but some of the best feeders I’ve seen have done it with as little rehearsing as possible.  Once a fighter has done Mayweather mittwork a bunch of times, he may be able to do it with his eyes closed like Floyd Mayweather Jr.  That is my contention to it.  But it is also evidence supporting that it builds muscle memory.

One big suggestion is the use of the body shield, so fighters can sit on shots and get hit at the same time they’re going downstairs.  The body shield helps you find angles instead of being right in front of the feeder who is supposed to act as the opponent rather than a partner.  This mimicking of a real fighting helps, too.  Any ad hoc hypothesis that my idea makes doing other non-fight work-outs pointless ignores the issue:  train target areas, but make it as close to real fighting as possible without sacrificing the intention.  Fighters benefit greatly when a trainer throws punches back with some realistic intent and randomness.  Fighters benefit from trying different moves.

Ultimately, the Mayweather mittwork can be effective when it supplements the myriad of conventional boxing training, but don’t sell it long.

PS. If a fighter isn’t training to throw kidney shots, is there absolutely any reason for the behind the back mitt feed?

7 Replies to “Is Mayweather Mittwork All Show?”

7 Replies to “Is Mayweather Mittwork All Show?”