Home » Clinching To Be Banned In Boxing?

Clinching To Be Banned In Boxing? 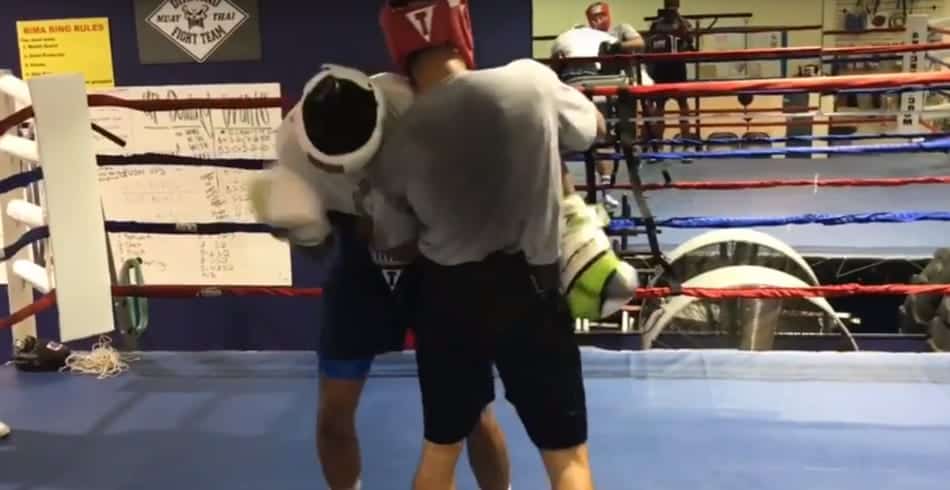 Fighters learn early in their boxing education to clinch – to take a break from action or to escape danger.  When I was 14 years old at the PAL, one trainer implored me, “If it’s getting tough, tie ‘im up.”  As fighters get more experienced, they use holding as a tool to abet poor training or inferior skills.  The best fighters, unfortunately, use holding to halt opponents’ onslaughts and as a strategy, too.  Clinching is simply a part of boxing.  It, however, shouldn’t be.

Why don’t the boxing powers, the Athletic Commissions or whoever, undo this boring tactic and outlaw the use of strategic holding?  Tactical fighters are ruining fights with this “counter-clinching.”  Bernard Hopkins, one boxer who I used to support, wards off fighters, not with covering up, moving, or out-punching, but by hitting then holding.  He opens up with a two or three punch combination and, whether he scores or not, he rushes in and hugs.  If Hopkins’s opponents “get off first,” Bernard fends off only for a moment then clinches.  Repeat, that’s the strategy.  Too many world class boxers are trying to master this non-skill procedure.  Hit, score, and instead of defending a counter, you counter his “would be counter” with a clinch. It is basically avoiding a counter by stopping the action.  Lame, isn’t it?

I haven’t deemed Ricky Hatton “decent” since he fought Juan Urango.  The public was enthralled with Hatton’s non-stop workmanship, but he started learning how to counter-clinch.  He counter-clinched so much that he did it as a lead (opposite of counter).  It was a strategy essentially countering the oppositions’ intentions to fight.  Urango was hardly beaten, as neither fighter was able to throw hands.  Urango was edged in scoring, due to his inability to counter Hatton’s lead clinching; every time Urango engaged, Hatton would hold.  Arguably, Luis Collazo beat Hatton, mainly because he was faster in between the boring clinches.  Collazo proved to be the better, more skilled fighter, but the judges were ultimately duped by what seemed to be Hatton pressing the fight.  Hatton’s clinching style seemed to have been fooling everyone until Floyd Mayweather, Jr. warned everyone that Hatton would hold him.  Against Mayweather, however, Hatton didn’t use any lubed-up strategy of counter-clinching; he was just trying to tie-up, immobilize, and punch.  It was a show of force to some people, but he was simply inferior and couldn’t catch Mayweather.  It was as if Hatton knew in his gut by round 4, “my style is a sham and Floyd knows it.”  His phony onslaught was almost laughable.  I am reluctant to call any fighter a coward, but to a tangible extent of conscience, I have to consider counter-clinching as a blueprint lacking in “fighting spirit.”  It’s the cautious fighter’s lazy, skill-less way out of sticking and moving.  Boxing fans don’t seem to consider that it could be just as yellow as running.

Clinching should only be incidental, but as a part of strategy, points should be taken off.  If a fighter is hurt, it’s an acceptable survival tactic.  As a game-plan, it’s unfair and just too hard to beat when applied with any sustained deployment.  It’s a “fear” tactic, literally, not to cause fear but to exercise it.  Like a cat and mouse fight in which there is an aggressor and a retreater, trying to avoid being hit by the use of holding is similar to running.  Like the runner (note that I do not mean a boxer-style fighter, I refer to e.g. Andre Dirrell vs. Curtis Stevens), the clincher will always achieve exactly what he’s trying to achieve first, avoiding boxing.  It would then be up to the aggressor to overcome, but he will have to work harder than his opponent in a fight in order to achieve his goal of exchanging and boxing – offense and defense – from the inside.  Considering everything being equal, the aggressor will always be at an unfair disadvantage (a fair disadvantage or advantage would be attributes such as size, speed, strength, etc.) against holders and runners.  It’s like a race with different starting points – two guys begin disengaged in combat, and one guy tries to catch up to engage while the other is racing to maintain his lead.  It is common knowledge that it takes two people to tango, two people to make a competitive fight, but it only takes one fighter to stink-up a joint.  If you have ever matched against a fighter who was unwilling to try inflicting damage on you, you may know how difficult it is to do the inflicting.

The all time master of the hit-and-hold was Muhammad Ali although he was a joy to watch.  His beautiful footwork and teasing jabs and quick power shots would fill the room with awe.  But the Ali after his three year hiatus was a showy holder.  Even in the thriller in Manila it was apparent.  Frazier would struggle to get on the inside, his ideal punching range, and Ali would cuff him behind the neck until the referee broke it up.  Against Chuvalo, same story.  Even against Evangelista, the same thing.  Nobody complained about it. The ref took no points away. Yet, cuffing behind the neck is a wrestling move pure and simple. Of course, Ali still produced great fights even post Cassius Clay, but he also chose his times to deploy counter-clinching.  The downside of banning holding all-in-all is that, perhaps, some potentially great fights would end quick, by uncompetitive knockouts or disqualifications.  I, however, believe it would bring other greater fights into fruition.

Counter-clinching has been around since the bare-knuckle game.  The Marquess of Queensberry Rules, gloved fighting, came into effect for one reason:  to add more violence and to hinder the wrestling.  Some people called it dirty boxing, but it was more like a dirty, boring hug-fest.  It sounds mythological when you hear that fighters went 70 rounds, but hugging and falling battle does not an epic make.  When we study, perhaps, the most exciting fighter ever, Mike Tyson, we may find his most lackluster bouts were due to opponents counter-clinching.  From an unable James Smith to an impelled Evander Holyfield, this wrestling style took away from the level playing field, or canvas.  I wanted to see toe to toe action, Holyfield with Tyson, Hopkins with Trinidad, Hatton with Mayweather.  Of course, some of those fights were memorable and masterpieces in their own right.  But they could have been better no matter the outcome.  I understand the science of boxing better than the next boxing pundit and pun-ditz, but I also believe in its rules a little more.  Holding is boring, unfair, and illegal in boxing.  With the right enforcement, it could have changed the course of boxing history.  When will it change boxing’s future?

0 Replies to “Clinching To Be Banned In Boxing?”

0 Replies to “Clinching To Be Banned In Boxing?”